This article continues the look at the OV satellite history from the author that was published in the September/October 2010 issue of MilsatMagazine on Page 82.

OV2
The Orbiting Vehicle (OV)2 series of satellites were built by Northrop for use with the Titan IIIC launch vehicle. The series was initially developed for the Advanced Research Environmental Test Satellite (ARENTS) program, which was intended to obtain supporting data for the Vela series, which was cancelled. 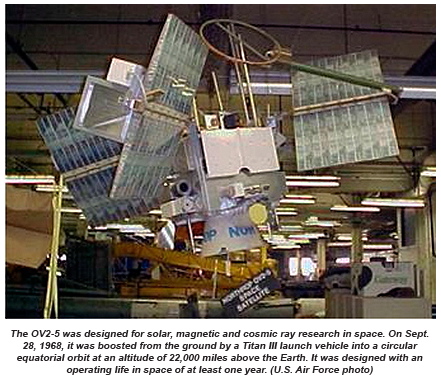 The OV2-2 and OV2-4 flights in the series were cancelled.

Launched on 15 October 1965, the objective of OV2-1 was to monitor biological hazards of the near-Earth charged particles. It had a mass of 59 kg and 14 instruments were carried to measure energetic particles, electromagnetic field strengths, very low frequencies and radiation effect on tissue equivalents, and included a plexiglass simulated human torso, high- and low-energy particle detectors, two plasma probes and two magnetometers. 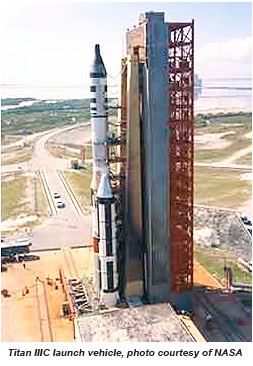 The satellite was launched with several other satellites on what was essentially a test of the Titan IIIC launch vehicle. It remained attached to the second stage of the launch vehicle due to a failure of the release mechanism.

OV2-2 was to carry out optical measurements from a 400 km circular orbit to provide a better understanding of the physics of space radiation and its relation to the Sun. The satellite was to be launched in 1966 and would have carried instruments similar to those to be carried on OV2-3. The mission was cancelled.

OV2-3 was launched on 21 December 1965 and carried 15 experiments to gather data on solar and geomagnetic activity in cosmic ray and trapped particle fluxes arising from such disturbance. The satellite tested various components from the cancelled ARENTS program, including a solar cell array, a solid propellant rocket for satellite spin-up, cold gas jets, a solid propellant rocket for orbital maneuvers, a solar aspect sensor and two fluxgate magnetometers.

The 192 kg payload failed to separate from the Transtage and contact was lost after launch. OV2-3 gathered data on solar and geomagnetic activity and changes in cosmic ray and trapped particle flux arising from such disturbances. It carried 15 instruments but contact was lost soon after launch.

OV2-4, which was to be flown in 1966 but was cancelled, was to carry out optical measurements from a highly eccentric trans-lunar orbit from which it would have studied space radiation.

OV2-5, the final spacecraft in the OV2 series was launched on 26 September 1968. The OV2-5 satellite collected data on the space environment at a synchronous orbit altitude, including cosmic rays, trapped particle fluxes and changes in fluxes arising from solar and geomagnetic disturbances.

Although only seven of the 12 appendages of the satellite deployed successfully, most of the instruments provided data. OV2-5 had a mass of 204 kg. The combined payloads on this flight have also been referred to as P67-2. The collection of data on the space environment in a geosynchronous orbit was the objective of the cancelled OV2-5.
OV3 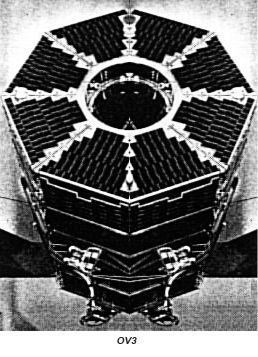 The OV3 series of satellites were built by Space General and were of an octagonal shape measuring 74 cm in diameter. They were used with Scout launch vehicles.

OV3-1, which was launched on 22 April 1966 with a mass of 68 kg, conducted radiation studies by measuring the angular distribution and energies of charged particles in the magnetosphere and upper ionosphere. It was also known as Ops-1527. The payload included proton and electron spectrometers, electrostatic analyzers, plasma probes, several Geiger-Mueller counters and two magnetometers.

The 80 kg OV3-2, launched on 28 October 1966, studied the electron and ion density and structure of the outer radiation belt and provided data on charged particle variations in the extreme upper atmosphere during the solar eclipse of 12 November 1966. Instrumentation included an electrostatic analyzer to measure proton and electron spectra, an impedance probe to measure electron density, a plasma probe to measure positive and negative charged particles as well as a mass spectrometer to measure ion species. 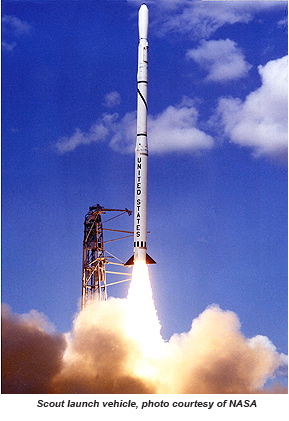 The 79 kg OV3-4 satellite was launched on 10 June 1966 and undertook radiation studies of the inner Van Allen belt and was also known as Personnel Hazards Associated with Space Radiation (PHASR) and Ops-1427. The payload consisted of a tissue equivalent radiation chamber, a linear energy transfer spectrometer, electron and proton spectrometers, a solid state charged particle spectrometer and a tri-axial magnetometer.

The fifth satellite in the series, OV3-5, did not achieve orbit on 31 January 1967, due to a launch vehicle failure. The 94 kg satellite carried two mass spectrometers, three ion density gauges and an impedance probe to measure properties of the atmosphere at altitudes between 250 and 860 km, including the constituents and density of the atmosphere and its temperature. It was also known as Atmospheric Composition Satellite (ATCOS)-1.

OV3-6, also known as Atmospheric Composition Satellite (ATCOS)-2, measured the properties of the upper ionosphere, including its composition, density, pressure and temperature. Instruments included two mass spectrometers, three ion density gauges and an impedance probe. The satellite, which was launched on 4 December 1967, operated for 5 days. 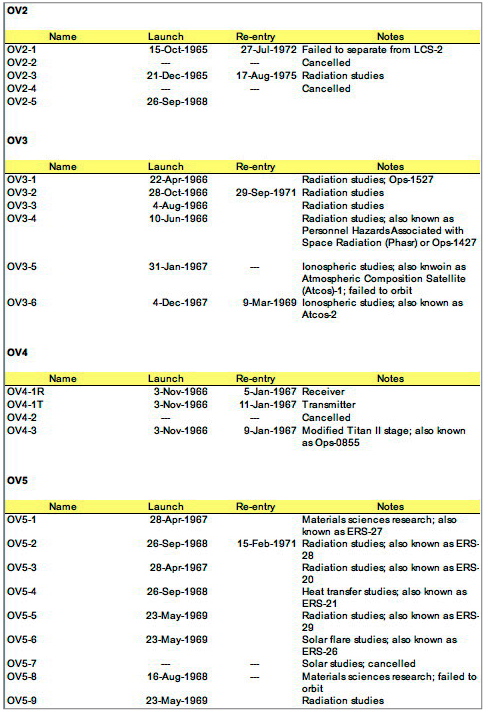 OV4
The Orbiting Vehicle (OV)4 satellites were technology spacecraft associated with the proposed Manned Orbiting Laboratory (MOL) that was proposed by the US Air Force and was eventually cancelled.

Launched with a Titan IIIC on 3 November 1966, along with several other satellites, the 136 kg OV4-1R satellite was used in conjunction with 109 kg OV4-1T to test the feasibility of using the ionosphere’s F layer as a wave guidance for HF and VHF transmissions between satellites out of line of sight of each other. OV4-1T carried a transmitter operating at 20, 34 and 46 MHz whilst OV4-1R carried a receiver. In addition, the satellites measured cosmic noise and the electron and air densities of the lower ionosphere. The project has also been referred to as Whispering Gallery.

A second set of Whispering Gallery satellites, designated as OV4-2 and due for launch in 1967, was cancelled, along with the entire MOL program.

The 9661 kg OV4-3, launched on 3 November 1966, was a boiler plate model of the Manned Orbiting Laboratory, to which the reconditioned Gemini-2 (which had been used on a sub-orbital flight on 19 January 1965) was attached. The objective of the flight was to test the launch vehicle configuration as well as to qualify the MOL heat shield. The mission was also referred to as Gemini B-Heat or Project Manifold and was also known as Ops-0855.

OV5
The Orbiting Vehicle (OV)5 satellites were built by TRW and were octahedrons with sides of 28 cm each, or tetrahedrons. They were launched as secondary payloads on Titan IIIC launches. 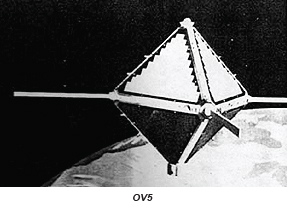 The 6 kg OV5-1 was also known as Environmental Research Satellite (ERS)-27 and conducted solar flare studies by measuring the X-radiation. Launched on 28 April 1967, the instrumentation consisted of a beryllium window proportional counter to measure X-rays from solar flares, solid state detectors to measure the background radiation, photomultipliers to measure the background radiation and six Geiger-Mueller counters for X-ray measurements.

On 26 September 1968, OV5-2 was launched. Also known as Environmental Research Satellite (ERS)-28, the 10 kg satellite was ejected from the launch vehicle during the early stages of the flight. It conducted radiation studies by monitoring the electron and proton environments in the Van Allen belts. The instruments consisted of three sets of omni-directional spectrometers, several Geiger-Mueller tubes and directional detectors to measure electrons and protons.

The 8.6 kg OV5-3 — AKA Environmental Research Satellite (ERS)-20 — conducted material studies to determine the effect of the space environment on metals. Launched on 28 April 1967, the payload consisted of 16 small arms which swept across organic and inorganic material samples outside the satellite, to measure the friction and drag characteristics.

The OV5-4 was launched on 26 September 1968. Also known as Environmental Research Satellite (ERS)-21, the 12 kg satellite obtained experimental data on the heat transfer in liquid under zero-gravity conditions in support of the SNAP design of propellant systems. The test tank contained heating elements immersed in fluid freon and an expandable bellows externally pressurised with a fluid mixture to permit constant vapor pressure measurements. The fluid pressures and temperatures were measured at various points in the tank. The experiment failed prematurely. 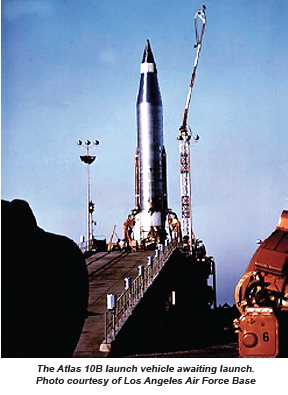 On 23 May 1969, three OV5 satellites were launched on the same Titan IIIC launch vehicle. The OV5-5, also known as Environmental Research Satellite (ERS)-29, was a 11 kg satellite to gather data for basic research on solar radiation and its effect on the magnetosphere. Using a VLF plasma wave detector, an altitude sensor, a magnetometer and seven particle detectors, it measured the VLF proton and electron fluxes as well as the temporal variations of such fluxes. The combined payloads on this flight have also been referred to as S68-3.

OV5-6 was another 11 kg satellite to gather data for basic research on solar radiation. The payload consisted of a solar flare monitor, six particle detectors, solid state detectors, a magnetic spectrometer, a Faraday cup and a fluxgate magnetometer. It was also known as the Environmental Research Satellite (ERS)-26.

OV5-7’s objective was to measure solar radiation. It had been intended to fly the payload on the launch vehicle that carried OV1-17 and others on 18 March 1969, but OV5-7 was cancelled to make way for the OV 1-17A (Orbiscal-2) payload.

The payload of the 13 kg satellite consisted of low-energy proton detectors, a dE/dx-E telescope, a Cerenkov counter, a VLF radiation detector, a solar X-ray monitor and a solar flare electron detector. 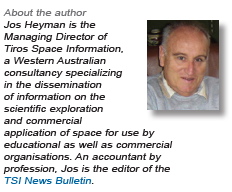 OV5-8 was one of 13 satellites launched on 16 August 1968 on an Atlas launch vehicle with a Burner II upper stage to conduct a materials friction experiment. The protective shroud surrounding the second stage of the launch vehicle failed to separate and the satellites, collectively referred to as SESP P68-1, were not deployed.

In their days, the Orbiting Vehicle series of satellites were remarkable in that details of the experiments were published, unlike other US Air Force satellites, which were classified and remain so — in most instances — today. We will probably never know the extent to which these small satellites were associated with classified programs, as they undoubtedly were.